A part of my mother’s story is Mr. Koch told her the artwork had been saved from a fire at an art storage warehouse. I had been looking for this fire to be in South Florida.

In The Notes are several mentions of a Washington Storage and Washington Gallery in Miami. Along with a lot of South Florida information he discussed with her, had me focused there. Plus I could only gather information as the internet grew and opened up the door of information for me to put this whole story together.

Obviously the reason for this blog is because our story isn’t truly being heard/believed or a cover up is going on. All I can say is in between all the “it is too much to believe” – please look at the artwork let it tell you if it is real or not. All I am trying to do is save some artwork and at the least its story. By its story I refer to the fact that the art in the warehouse has been destroyed and can’t be rescued, the 1990 art heist the museum states in 2013 (9 months after my email) it has been solved but the artwork has not been recovered – it is either destroyed or the cover up is so large they are still unable to retrieve it because by doing so the truth has to be exposed.

So with all the destroyed, denied and missing artwork shouldn’t their story still be known/told?

After years of research, putting together the information/facts from my mother’s story regarding her artwork I was able to find the fire we had been looking for for 20+ years.

Only instead of it being somewhere in South Florida it was across the pond in London.

I believe that Frederick Robinson Koch and/or John Olsen know or were directly involved in the October 7, 1991 James Bourlet & Sons Art Warehouse Fire. 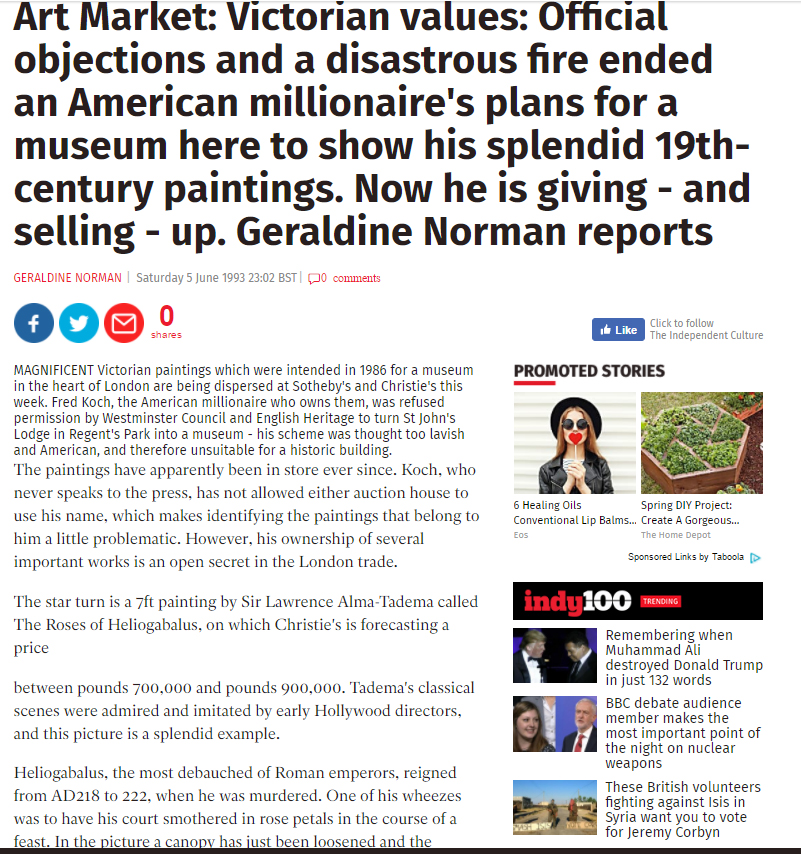 After at least 5 -6 emails with John Olsen (who is Frederick Robinson Koch’s assistant) over an approximately 3 month period and the oddness to the communication continued to let me know I was on the right track.

Especially by the end of the 3 months I had finally found a younger photo of Frederick Robinson Koch to show my mother and when she was near tears and trembling from the excitement that I had actually found him. 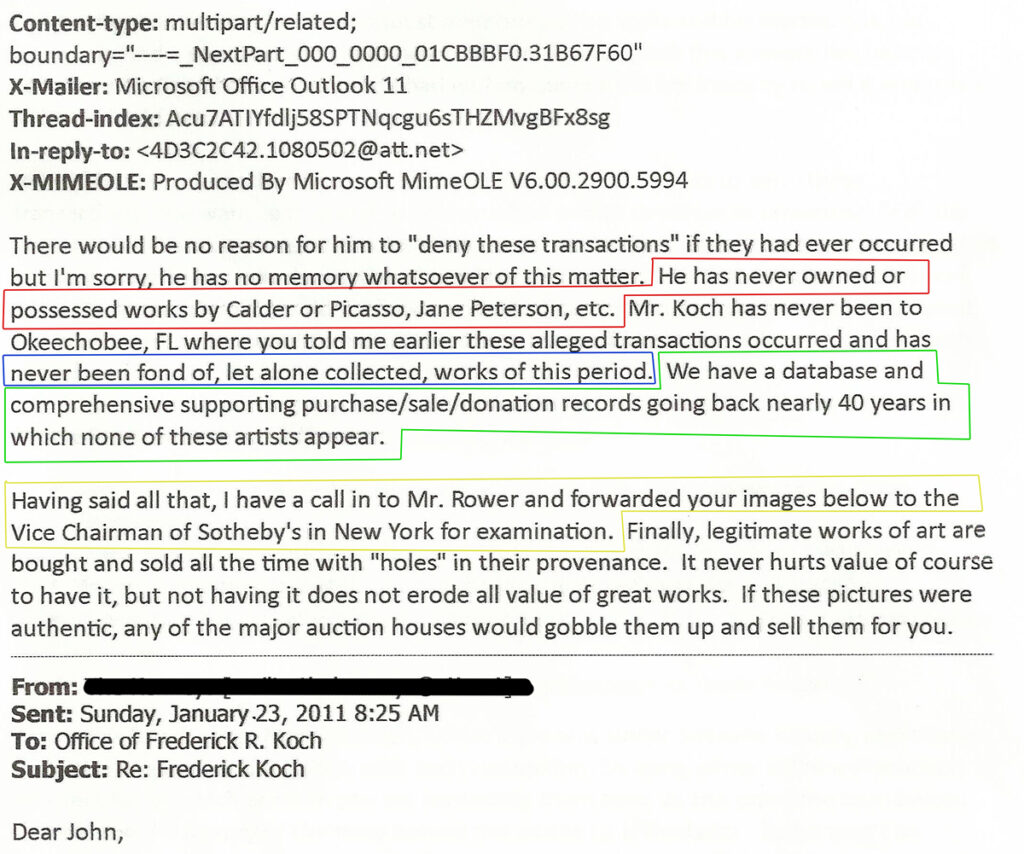 Below are photos of the man my mother recognizes as the man that visited with and shared stories along with selling her the artwork.

Now to break down what I think is important:

1. He has never owned or possessed works by Calder or Picasso, Jane Peterson, etc.
The following article says differently :
America Rules – OK? by GODFREY BARKER – This article is gone but I have it printed it out will take photo and post it.
Direct Quote:
“Fred Koch and the Getty Museum, elevated French Impressionism, Van Gogh, Picasso and early 20th Century Europeans to the summit and ensured that on the auction houses’ current list of The Top 100 Pictures Ever Sold, no fewer than 92 are works since 1870.“

2. Never been fond of, let along collected, works of this period.
Again the following article says differently :
America Rules – OK? by GODFREY BARKER – This article is gone but I have it printed it out will take photo and post it.
Direct Quote:
“Fred Koch and the Getty Museum, elevated French Impressionism, Van Gogh, Picasso and early 20th Century Europeans to the summit and ensured that on the auction houses’ current list of The Top 100 Pictures Ever Sold, no fewer than 92 are works since 1870.“ 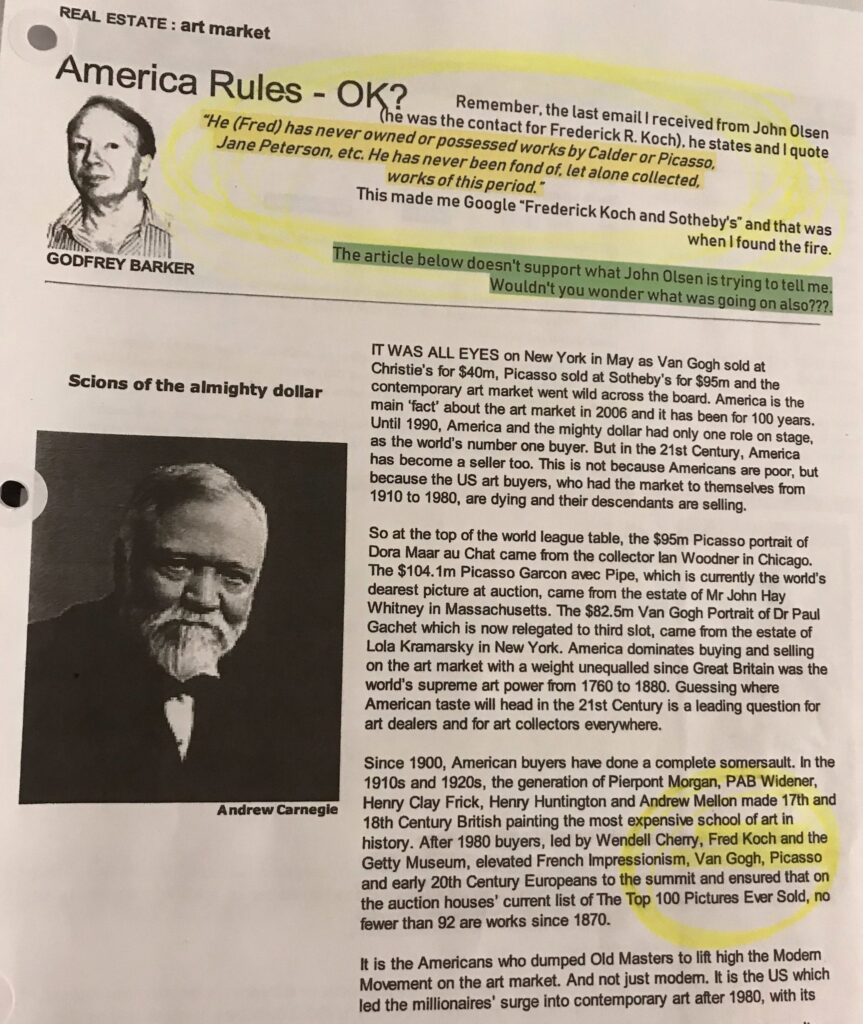 3. We have a database and comprehensive supporting purchase/sale/donation records going back nearly 40 years in which none of these artists appear.
He has been emailing with me at this point for 3 months and has never mentioned anything about a database until now. Why would I ever believe a database that he has created????? Besides in the first 4 emails with me he couldn’t even figure out what his title is changing it each time he responded to me. 🙂
I also wonder what those who know he has owned this art, think about him lying about ever owning the art. Plus when I reported the fire to Lloyds of London and Mr. Julian Radcliffe at The Art Loss Register and showed him the artwork sold to my mother. His response was known destroyed artwork has been reproduced/forged before. Hmmm that is a odd comment meaning our artwork is known destroyed artwork. But wait the artwork isn’t destroyed. So if Mr Radcliffe and Lloyds of London know if Frederick Robinson Koch owned this artwork don’t they wonder what is going on here? Why is John Olsen not only saying they never owned it but see the next comment…

4. Having said all that, I have a call into Mr. Rower and forward your images below to the Vice Chairman of Sotheby’s in New York for examination.
I asked him to contact the art foundations that we had submitted our artwork to which included Mr. Rower. But not Sotheby’s. If I am lying, why would he ever send our information on to Sotheby’s???
————————————————————————————–
It was more than a year later that I found the Godfrey Barker article above. However, after the above email response from John Olsen, I googled “Frederick Koch Sotheby’s” and found the following article. Before clicking into the article, from the title – I knew I found the fire and my stomach turned. Then after clicking in and seeing the date of the fire was mere weeks before his arrival in my mother’s life everything was so surreal from that moment forward. This has been the most crazy journey ever and all I can do is continue to try to do the right thing by fighting for the truth.
Article: Disastrous fire ended an American Millionaire’s plans for a museum here to show his splendid 19th-century paintings. Now he is giving -and selling – up. Geraldine Norman reports.
——————————————-
On February 11, 2012 I visisted with Mr. Robert Wittman at the West Palm Beach Convention Center. I told him why I had reported the fire and felt so strongly about it was because I had been looking for a fire in South Florida. My mother had said Mr. Koch told her the art was saved from a fire at an art storage facility and we thought the fire was in South Florida.
At this February 11, meeting the Koch brother’s Charles, David and William were also there – only they didn’t have me speak with them. Which I would of gladly done given the opportunity. Going to that convention center and reporting my mother’s story against a billionaire family was a very hard thing for me to do but I did it.
So imagine my surprise when on Sunday, March 4, 2012 the following article came out Palm Beach William Koch’s ‘Super-Wild’ West Collection by Scott Eyman and states “Of all the storied paintings in William Koch’s collection of Western art, his favorite, the one he would rush into a burning building to save, is not a Remington, not a Russell, not a Wyeth. It is, rather, one of the most obscure works in his collection“.